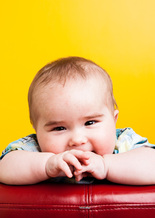 This is Bridger.  On May 20th 2013 he was diagnosed with a rare childhood catastrophic seizure disorder called "Infantile Spasms." Bridger had clusters of seizures (45+), up to ten times a day, for more than 10mins.  Bridger regressed because of the seizures and is still fighting to develop correctly.  The seizures initially look like reflexes which is why it is so often misdiagnosed.  This is why getting awareness out is so important to me.  Bridger still suffers from the seizures even after 5+ months of multiple medications.  This is why donating and finding a cure is vital to me and to hundreds of other parents and children suffering.